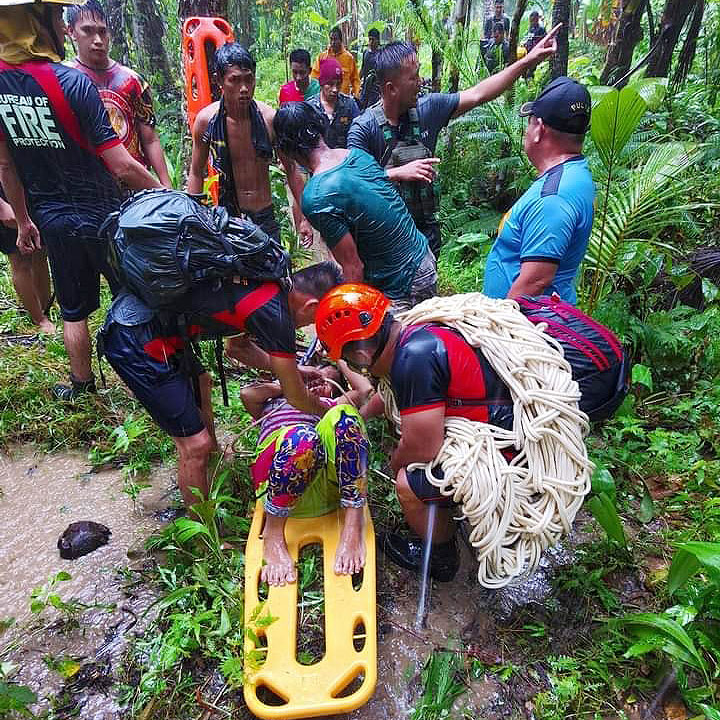 EMERGENCY responders rescue a resident of a community in Baybay City, Leyte that was affected by what authorities described as a massive landslide triggered by continuous rains from tropical depression Agaton. — BUREAU OF FIRE PROTECTION-BAYBAY CITY

AT LEAST 28 people were reported to have died in landslides and floods triggered by tropical depression Agaton, with international name Megi, which brought continuous rains over central Philippines since the weekend.

The police regional office in Eastern Visayas said on Monday night that it recorded 21 casualties from a massive landslide in Baybay City, Leyte and one who died from drowning in Motiong, Samar.

The national disaster management council’s Tuesday update, meanwhile, reported another three deaths each in the regions of Central Visayas and Davao, subject to final validation.

“There are still reported missing individuals and are being searched, 87 are wounded and are being treated,” the police Eastern Visayas office said in its 8 p.m. report on April 11.

More than 139,000 people have been affected across nine regions, including about 19,000 who were evacuated, according to the National Disaster Risk Reduction and Management Council (NDRRMC).

Sea travel to and from 39 seaports were suspended, leaving over 6,000 passengers stranded, based on the Philippine Coast Guard’s monitoring report.

As of Tuesday early afternoon, moderate to heavy rainfall warnings were still up in several areas, based on regional advisories from state weather agency PAGASA.

Agaton was expected to linger over the Samar-Leyte area before moving southeast towards the Philippine Sea by Tuesday night or Wednesday morning.

PAGASA said “the remnant of Agaton will then continue tracking generally eastward over the Philippine Sea as it becomes assimilated within the circulation of” typhoon Malakas, which entered the Philippine area around 10 a.m. Tuesday at 1,435 kilometers east of southern Luzon.

Typhoon Malakas, locally named Basyang, was forecast to be out of the Philippines by Tuesday evening and would not affect the country’s weather condition.

In a news conference, Palace spokesman Jose Martin M. Andanar said more monitoring systems used for typhoons and floods have been put up since the start of Mr. Duterte’s term in 2016.

He said the Department of Science and Technology (DoST), which heads the country’s weather bureau, now has a total of 17 doppler radar stations as of June 2021.

But the DoST already had 10 doppler radar stations, which are used for tropical cyclone and rain monitoring, before Mr. Duterte assumed office in 2016.

Mr. Andanar said that from zero, the government now has 29 high-frequency doppler radars, which are used to monitor sea waves, as of June 2021.

He also said that flood forecasting and warning systems at river centers increased to 15 in 2021 from five in 2016.

It was the late President Benigno S.C. Aquino III who pushed for the modernization of the country’s weather forecasting system.

The DoST under his watch launched Project NOAH, a disaster prevention and mitigation research program that oversaw the establishment of monitoring stations in major river basins and flood-prone areas in the Philippines, which is hit by an average of 20 typhoons a year.

Project NOAH was not renewed in 2017 with the Duterte administration citing lack of funds for its continuation and implementation of other components.

Mr. Aquino said in a 2011 public address that he personally checked on the reported shortage of equipment and other financial problems besetting the country’s state weather bureau shortly after he assumed office in 2010.

In the same year, he directed the Department of Budget and Management to release P150 million for the installation of 1,000 automatic water level sensors nationwide to aid forecasters in tracking river water levels and potential floods, according to a website post of the Philippine government’s official gazette.

In 2013, the Philippines was hit by super typhoon Haiyan, known locally as Yolanda, one of the strongest tropical cyclones recorded globally that killed about 6,300 people. — Marifi S. Jara and Kyle Aristophere T. Atienza