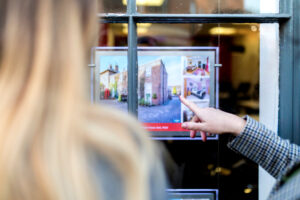 UK property remains a sellers’ market, according to property portal Rightmove, with Grays in Essex named as the top spot for vendors.

It said eight in 10 properties listed for sale on the website in the area have already had offers accepted.

Some coastal towns also appear on the list of in-demand areas, as pandemic priorities among buyers for indoor and outside space continues.

Chelsea in London is calculated to be the best market for buyers at present.

A surge in house prices in the last 18 months has been driven to a considerable extent by high demand from buyers which has been unmatched by the number of homes on the market.

Rightmove analysed listings in each area, calculating the proportion of properties that were sold subject to contract. That means an offer has been accepted, but the sale – and potentially the final price – are still to be confirmed.

It found that Grays, a town on the Thames 20 miles from East London, and Mangotsfield near Bristol both had 84% of listed properties sold subject to contract.

Also in the 10 areas with the highest proportion of listings with offers accepted were Eastleigh, Redditch, Yeovil, Hythe, Gosport, Corby, Fareham, and Bognor Regis.

At the other end of the scale were Bayswater in London, with 14% of listings sold subject to contract, Aberdeen with 14% and Chelsea with 13% listings at that stage.

The areas with listings least likely to be the subject of offers are primarily in London.

Analysts also found that that eight out of 10 houses for sale for £250,000 or below in Britain were sold subject to contract. There was more demand for houses than flats, the research found.

Tim Bannister, Rightmove’s director of property data, said: “Sellers have had a better chance this year than at any time over the past decade of finding a buyer for their home.

“Over the past year the higher price brackets have been performing strongly, helped by the temporary stamp duty exemption threshold increasing to £500,000, but the tapering until the end of September has helped the mass market of £250,000 and below emerge as the strongest market more recently.

“The race for space is still a critical need for many, but smaller homes are now coming back into the most competitive property types, which is helping to sustain demand in the lower priced brackets.”