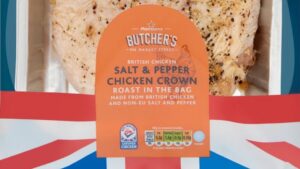 Morrisons has backed down after customers complained about its labelling of a chicken meat product as containing “non-EU salt and pepper”.

The supermarket chain’s salt-and-pepper chicken crown features the Union Flag on its label, which says that it is “made from British chicken”.

The label provoked an angry reaction on Twitter, including one accusation of stoking “anti-EU hatred”.

In response, the firm said the wording was “an error for which we apologise”.

“We are changing the packaging immediately,” its tweet added.

A spokesman for Morrisons said: “It is adhering to packaging regulations rather than making any political point.”

The supermarket said it would change the packaging and de-emphasise the mention of non-EU salt and pepper, but said it would still have to be included somewhere on the wrapping because of packaging laws.

According to government guidance on food labelling, the term “non-EU” must be used on meat packaging when full country information is unavailable.

From October next year, following post-Brexit rule changes, this will be replaced by “non-UK”.

Among the reactions from customers, some pointed out the irony of a soon-to-be US-owned supermarket displaying its British credentials.

Others poked fun at the wording in other ways, with one person tweeting: “I’ve just had a look at my salt and pepper and it has no country of origin on it. It’s from Aldi…

“Does that mean it’s non-EU or not? Is it safe to put it on an English chicken? Asking for Morrisons…”

One customer raised the issue of food miles, saying: “In other words, they get their S&P from somewhere further away, creating more impact on the climate.”

Another queried how useful such information was for shoppers, tweeting: “Aside from anything else, I’d have thought most normal people want to know where foodstuff IS from, not where it isn’t.”

The move comes in the midst of a debate in the food retailing industry about firms’ increasing tendency to use patriotic imagery on packaging, with trade publication The Grocer identifying it as part of a post-Brexit “culture war”.

However, those who support the trend see the “made in the UK” tag as a sign of quality rather than a political statement.

Get back into the office, bankers and accountants are told