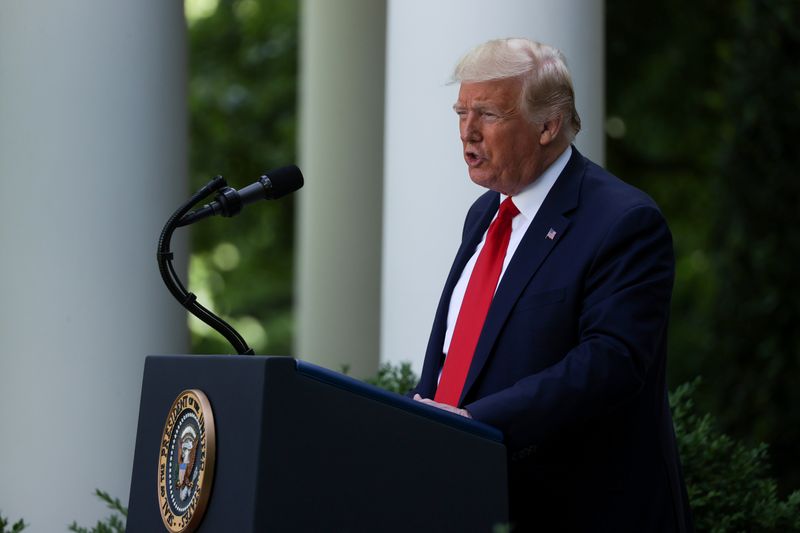 (C) Reuters. U.S. President Trump speaks about negotiations with pharmaceutical companies over the cost of insulin, at the White House in Washington

WASHINGTON (Reuters) – An effort to extend parts of the Foreign Intelligence Surveillance Act (FISA) stalled in the U.S. Congress on Wednesday, after President Donald Trump promised to veto it and Republicans withdrew their support.

The House of Representatives’ Democratic leaders said late on Wednesday a vote on renewing three government surveillance rules that expired in March would not take place as expected. There was no word on when a vote might be rescheduled.

Trump threatened a veto on Twitter earlier on Wednesday, posting: “If the FISA Bill is passed tonight on the House floor, I will quickly VETO it.”

After the tweet, none of Trump’s fellow Republicans in the House backed a procedural measure related to the bill. Some of the 183 Republican “no” votes came from lawmakers who previously supported it.

There were “no” yes votes from Republicans. Fourteen did not vote.

With liberal Democratic privacy hawks also opposing the legislation, it was not clear that it could pass. Congress has never overridden a Trump veto.

Attorney General William Barr wrote an earlier version of the bill that passed the Democratic-controlled House – but not the Senate – with bipartisan support just before lawmakers left Washington as the coronavirus pandemic spread.

Trump recently turned against FISA, charging on Twitter that former Democratic President Barack Obama’s administration improperly used it for surveillance of his campaign aides in 2016.

The rules that would be renewed until December 2023 cover the FISA court’s approval of warrants for business records, allow surveillance without establishing that a subject is acting on behalf of an extremist group, and allow continued eavesdropping on a subject who has changed cellular telephone providers.

Disclaimer: Fusion Media would like to remind you that the data contained in this website is not necessarily real-time nor accurate. All CFDs (stocks, indexes, futures) and Forex prices are not provided by exchanges but rather by market makers, and so prices may not be accurate and may differ from the actual market price, meaning prices are indicative and not appropriate for trading purposes. Therefore Fusion Media doesn`t bear any responsibility for any trading losses you might incur as a result of using this data.

Fusion Media or anyone involved with Fusion Media will not accept any liability for loss or damage as a result of reliance on the information including data, quotes, charts and buy/sell signals contained within this website. Please be fully informed regarding the risks and costs associated with trading the financial markets, it is one of the riskiest investment forms possible.